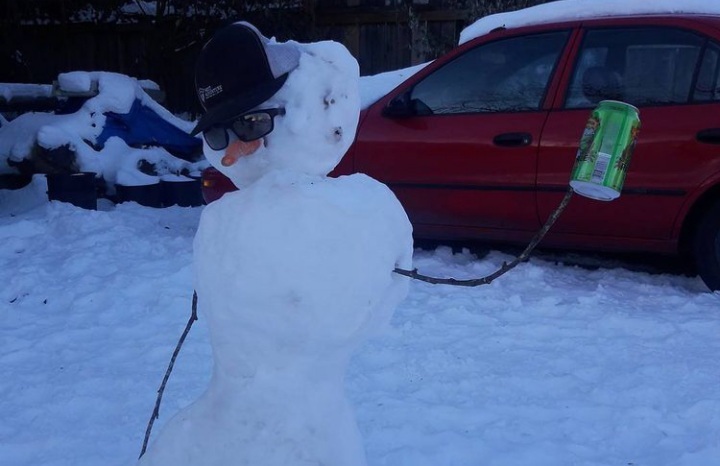 As a snowboarder or skier, the last thing you want to hear is a doctor asking, “So how did this happen?” But unless your luck is matched only by your timidity, you’ll find yourself responding to just such question at some point during your mountain tenure. And while the MDs have heard ‘em all before, trust your favorite loc’: There’s one answer you don’t want to give.

“I don’t know,” I shrug, as an anesthesiologist makes small talk and readies me for a session under the knife. I’m just a kid in my 20s. All IV’ed up and prepped for a Dismembered Pyeloplasty—a dire procedure to remove, rebuild, and reinstall a badly ruptured left kidney. Traumatized tissue will be reshaped, tubes scoured out, and capillaries cauterized. I’ll ostensibly awaken hours from now to dozens of staples, hundreds of stitches, and six weeks flat on my back. Suffice to say, my snowboard season is over.

It’s about time though. I’ve spent the prior three years enduring the unspeakable agony of nearly constant kidney stones. It starts with my renal reservoir swelling to three times its normal size as the stone blocks the flow of fluid through the ureter. Then everything begins to contract in an excruciating attempt to force one or more jagged crystalline calcifications through the ever-increasing scars in the plumbing above my bladder. It takes days and I’m lacerated from within as I writhe, roar, scream, and cry. Emergency rooms and excessive morphine are mandatory, provided I can make it to a hospital. I drive for a living and more than once I’ve passed out from the pain and awoke in a puddle of piss on the side of the highway.

Nobody knows why an otherwise active shredder suffers such a diagnosis, much less me. They’ve tried every description of so-called noninvasive surgery, shoving all manner of scopes, lasers, and cameras up the only pre-existing drain in my system. They’ve bruised me purple with ultrasonic shockwaves designed to obliterate the wretched little rocks. They’ve restricted all dairy, prescribed a gallon of daily fluid intake, and probed, poked, and prodded me to oblivion. And nothing stops the internal onslaught.

As I lay there in the operating room, inhaling the scent of antiseptic and terror, the cause of all this hell appears at last in my mind’s eye.

I flash back to fir trees and a swath of silver stars against a cold black sky. Some asshole is moaning and the sound reverberates nauseatingly through my throbbing skull. I want to tell him to shut the fuck up before I hurl but breathing is a Herculean effort. Every inhalation sends a burst of flaming torment through my left flank, despite the fact I seem to be convulsing uncontrollably with cold. I’m confused, thirsty beyond measure, and overwhelmed by the urge to just go to sleep.

But I’ve got a need to urinate that defies description. And I’ll never live it down if I piddle my bibs, much like I did when I dozed off on the employee bus after too much tailgating in the Meadows Lot. Then I realize the moans are mine and I’m flat on my back in a snowy stand of trees, out-of-bounds, drunk, injured, and utterly alone in the mountain night.

It takes an eternity to work myself up and my abdomen explodes in fresh fury from the attempts. My mittens shake violently and my bindings blur. But somehow, I unstrap, stagger out of the trees into the starlight, drop my drawers, and send a steaming stream of blood-red urine splattering onto the Heather Runout Trail.

Back on the operating table, I’ve got tears in my eyes as the anesthesiologist brings the gas to my mouth.

“Count backwards from ten,” he says.

“Doesn’t matter now,” I muttered into the mask, not realizing I’m wrong again.

“So the pyeloplasty in ’99 proved a success?” asks my brand new doctor. She’s sharp-eyed, roughly my age, and exudes warmth, competence, and health as she consults her computer screen. I trust her already.

“Yeah, surgery worked wonders!” I answer enthusiastically. “I can snowboard, skate, work, and otherwise go about my life. No stones since.”

“Mmhmm.” She continues to scroll. “But let’s talk about your medical history.” Her eyes widen to incredulity as she recites a litany of injury: Three shattered arms resulting in 27 pins and four six-inch metal plates. Enough broken noses to necessitate sinus reconstruction. Compound tibia and fibula. Numerous fractured wrists, ankles, feet, and hands. A fragmented femur, split sternum, and wrecked ribs. Broken clavicle. Torn rotator cuff. Skull fractured by a shovel. And concussion after concussion after concussion. “And I’m guessing those are just the injuries you sought help for,” she stated.

“I was a competitive skateboarder and snowboarder in the ‘80s and ‘90s,” I chuckled dismissively. “I ride a lot of bikes too. And I’ve worked as a liftie, carpenter, and trucker.”

“Mmhmm,” she responded. “And then there’s your mental health and social history.” Sadness clouded her brow as she rattled off medications for anxiety, insomnia, and depression, followed by notes from various counselors and therapists: A dozen badly broken childhood homes interspersed with intercontinental immigration. The teenaged stint in a drug treatment center. Relational traumas, repressed memories and dissociative events. The incongruency of a college graduate and freelance writer driving a truck for a living. “Wow,” she exhaled. “And you’re here because just last week you were admitted to the ER after ingesting so much alcohol you began vomiting blood?”

The room got very quiet as I ran out of jocular explanations.

“You have every symptom of Traumatic Brain Injury and Post Traumatic Stress Disorder,” she said flatly, bringing those serious eyes to mine. “Anxiety, depression, impulsivity, memory loss, and trouble concentrating. And you might be the highest functioning alcoholic I’ve ever met.”

“Well yeah,” I laughed. “I gotta deal with the voices somehow, right?” I think we both recognized some truth in the statement as the joke flatlined.

Conditions are killer as I come ripping down through the trees into a small glade. Eleven inches fell overnight, the sun’s shining, and freshies abound. I know this line like only an old Shooting Star Liftie can, and my 195cm Doughboy is waxed up to get down. I’ve got years of sobriety now, a season pass, and I’m selling stories for a living. Literally and figuratively, my riding, writing, and relationships are all moving in positive directions.

Brimming with stoke, I spring off a snow-loaded sapling and send a floaty mute-grab down into a soft, creamy landing. I’m not far from the chair and I need to hold my speed for the runout, so I crank a deep toe-side turn and point it between two firs. And instead of the gully full of fresh I expected, I find a steep chute full of burnished hardpack. There’s an oh-shit instant as my edge washes out and then my noggin whacks the ice, I spin around, and I’m sliding headfirst on my back.

I land 50 yards downhill in a pile of fresh snow with the wind knocked out of me and my helmet askew. I’m seeing stars and it’s a day-ender for sure but nothing to get excited about. I congratulate myself for embracing the brain bucket and lay there looking up through the dense firs for a few. And I realize I’ve been here before. There’s no fear in it though. Just a healthy dose of humility and the peace of knowing I’m exactly where I’m supposed to be. It’s been 25 years of boards and bikes since the night I chose not to go to sleep, and I spent 20 of them in an alcoholic haze of roaring highs and groveling lows. Mercifully, there are as many ways to get sober as there are to get down a mountain. We all pick our own lines, and the only constant is what’s beyond our control.

While I’ve learned more than few things about pain and healing, you won’t get pithy one-liners, sobriety soliloquies or much in the way of wino wisdom out of me.

I will say when you boil it right down the worst injuries are cyclical or stem from overuse.

I’ll point out falling is inevitable, too. Though, if there’s anything more important than standing back up, much like a lot of the ‘80s and ‘90s, I guess it’s still blacked out.

The answers aren’t in the past, anyway. We are what we choose in this moment. So, let’s celebrate the bright spring days to come and the gift of sun-soaked skiing and snowboarding. Respect the mountain, ride with a friend, and PLEASE wear your damn helmet!

Always remember, you don’t have to stay in those dark woods.

About the author: Dave Fitzpatrick is a lifelong rider of boards and bikes. Be it snow, skate, MTB, or fixie, he’s devoted decades (and considerable portions of his memory) to the pursuit of the perfect line. Likewise, this obsession carries into his literary endeavors, which are found in Willamette Week, Mercury, Oregonian, Bull; Men’s Fiction, and Foulweather. In addition, he’s a trucker of two million all-weather miles, meticulous carpenter, passable logger, and an abysmal bartender. Currently he’s living the life of leisure and contemplation known only to writers of advertising copy and those who hurtle down the slopes of Mt. Hood on absurdly large snowboards. While possibly the luckiest man alive, he’s well-aware fortune cuts both ways and tries to live like this is the eighth of his nine lives. Much to his surprise, he often succeeds…

Previous Story
A Fluke Crash and a Determined Comeback 47 Responses to :
Fall Down Seven Times, Stand Up Eight